Briefly Reviewed: Satan is Real and Suzy Zeus Gets Organized

I picked up Satan is Real: The Ballad of the Louvin Brothers by Charlie Louvin (and Benjamin Whitmer) off a random shelf because of the totally amazing cover, was intrigued by the blurbs even though I didn’t know who Charlie Louvin was, started reading and then realized I totally should have known who he was because I know his songs, which folks like Emmylou Harris, Johnny Cash, Dolly Parton, and Alison Krauss have covered (“I Don’t Believe You’ve Met My Baby,” “If I Could Only Win Your Love” etc.). The Louvin Brothers’ swooping, interchanging harmony inspired the Everly Brothers and others, and they were reportedly Elvis Presley’s favorite gospel duo (and the reason why Presley, despite this, never covered them is herein explained).

Then I kept reading and, man, what a life story, full of stories of growing up hard, of Charlie’s troubled, destructive brother and musical partner Ira, of behind-the-Opry scenes, of fistfights and gospel concerts and women and trouble and fame and famous friends and music. Charlie Louvin, even though he was ‘the good brother’, was a hell of a character, and I liked the hell out of his memoir (even when he said things I don’t like). Honesty, straight-upness, and of course some amazing stories to tell will do that. 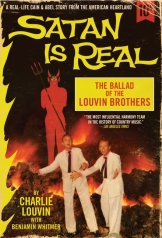 Suzy Zeus Gets Organized, by Maggie Robbins,  I read because it was recommended by my friend Liz. Though I would have picked it up if I’d come across it randomly because that title is just awesome. And the book, which is a novel in verse, lives up to that awesomeness. All the poems are in the same basic form, proof yet again that even the seemingly most limited rhythm can, in the hands of a great poet, hold infinite possibilities. From the first poem, “Suzy Zeus Sets Some Limits”:

This sing-songy rhythm is varied in wonderful ways throughout as the story of Suzy Zeus is told, her travails, her loves, her hates, her wants, her failings. Take this heartbreaking stanza and a half, still in that same form, from “Suzy Settles It”,

Suzy’s got a great sense of humor too, amongst the pathos and the pain. From “Suzy is a Berliner”:

Suzy found a Hindu Buddhist,
lithe and lively, smart and small.
Saw him in Der Rindfleischkeller—
saved him from a barroom brawl.
Kissed her neck for two full hours.
Mendicants. They never call.

Great stuff, all the way through. Suzy grows on you quick and of the form, I never tired (though I totally did find myself unconsciously speaking in it).