1 Perfect Title, 2 Oof Endings, and some other fun

The mix this week: two poems with hella amazing endings, one with a perfect title, a cool website devoted to black history (including in the West), and for fun some “The Future that Liberals Want” meme and french bulldogs in sweatshirts on a couch.

and includes this stanza, so delicious to read aloud and an excellent use of “bling”:

Naysayers in sequins or tweeds, libertine or ascetic
Find a sensual frisson in what they’d call bling about the dark times.

and after much more like that ends with this gut punch reminder:

You come home from your meeting, your clinic, make coffee and look in the mirror
And ask yourself once more what you did to bring about the dark times.

For this month’s Famous People poem, Gwendolyn Brooks’ “Paul Robeson” and “Of Robert Frost” (because just one Gwendolyn Brooks poem at a time isn’t enough. Also I’ve missed a few of this supposed-to-be monthly series).

I had to wake up super early last Sunday morning, which I wasn’t that thrilled about, but when my radio came on it happened to wake me up with the sound of Gwendolyn Brooks’ amazing voice, and then I didn’t mind so much. (A BBC show not currently available online, alas). Her delightful presence and dynamic reading voice even on old somewhat scratchy recordings is just phenomenal—I would have loved to hear her in person.

Here she is reading her most-anthologized poem “We Real Cool” (and explaining that she sort of wishes she were also known for writing other poems) so you have a taste.

Brooks wrote about regular people (“Gay Chaps at the Bar“, “The Bean Eaters” for e.g.) with great compassion and insight, and she wrote about some famous people too with her remarkable precision and verve. Here are two, “Paul Robeson” and “Of Robert Frost“. They’re both short portraits, focused, the Frost poem’s lines lines long but with short, blunt sentences, with the wonderful detail of his eyebrows “neither too far up nor down.” The Robeson lines and sentences contract and swell, and wind up on one of my favorite phrases in Brooks’ poems, “we are each others’ / magnitude and bond.”

(After reading “Paul Robeson” you will undoubtedly want to revel in his famous voice a while. Here he is singing for workers at the in-progress Sydney Opera House, and here being interviewed about civil rights.)

Last week I finished the last square on the Seattle Public Library’s Summer Book Bingo card and turned it in with one whole reading day to spare! A delightful summer of both more and different reading than I’d have done without that impetus. 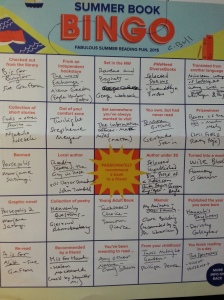 Plus! apparently I have a 1 in 197 chance at winning that prize the SPL and Seattle Arts & Lectures folks will be drawing for this Tuesday— season tickets to SAL + a library of books by the speakers. (And 218 bingos are in for the drawing for a gift certificate to a local bookstore.) It is such a delight to be living in such a book-centric city.

Here’s a quick rundown on the books I read, rated ◊ to ◊◊◊◊◊ (more, of course, is better): END_OF_DOCUMENT_TOKEN_TO_BE_REPLACED

September: Autumn (“and gathering swallows twitter in the skies”), time for school again (or for skipping school (“We / thin gin”) or for staying home sick (like “little Peggy Ann McKay”)), for remembering September 11th (“the photograph halted them in life”), time for apple picking (“the scent of apples: I am drowsing off”) and for dinner dates with apple pie (“there are very huge stars, man”), for watching harvest moons (“As a beautiful friend / Who remembers”) . . .